Dr.  Faith Gibson Hubbard is a passionate advocate, educator, public servant, and community builder. In April 2019, Dr. Gibson Hubbard was appointed to serve as the first Executive Director of Thrive by Five DC, leading efforts to ensure every family in the District knows about and is connected to programs and resources. Dr. Gibson Hubbard worked  to establish the Thrive by Five Coordinating Council, which was comprised of government agencies, parents and community partners, to support the efforts of Thrive by Five DC serving as a convener and liaison between the government, community, and non-governmental groups to focus attention on collaborative action in order to improve outcomes in perineal health and early learning and development.  During her tenure, Dr Gibson Hubbard lead the planning and execution of Thrive by Five’s signature event, the National Maternal & Infant Health Summit. The Summit is held annually in September and focuses on improving outcomes for perinatal health in the District and beyond.

Dr. Gibson Hubbard started her career as a middle school language arts teacher and continues to be a passionate and committed public servant. She has served in several professional and volunteer roles focused on community engagement including as President of the Ward Five Council on Education, as a member of the Advisory committee for the Student Assignment and School Boundaries Review process for the District of Columbia Public School, as member of the DC Public Library Board of Library Board of Trustees, and as a board member on the Regional Board of Directors for Reading Partners DC. Recently, Dr. Gibson Hubbard served as a member of the Education & Child Care Subcommittee for Mayor Muriel Bowser’s ReOpen DC Advisory Group; and as a member of Mayor Bowser’s Commission on Healthcare Systems & Transformation, which focused on recommendations and strategies and investments necessary to transform health care delivery in the District of Columbia. Currently, Dr. Gibson Hubbard serves as a founding board member for Ujima – The National Center on Violence Against Women in the Black Community.

Dr. Gibson Hubbard is an alumna of Education Pioneers and member of The National Association for Family, School, and Community Engagement (NAFSCE) and ZERO to THREE. Additionally, she is a proud member of Delta Sigma Theta Sorority, Inc.; The Links Inc.; and Jack & Jill of America, Inc.

Dr. Gibson Hubbard holds a Doctor of Philosophy (Ph.D.) in Public Administration & Public Affairs (Virginia Tech); a Master of Public Administration (Old Dominion University); and a Bachelor of Arts in Journalism/Public Relations (Georgia State University). Dr. Gibson Hubbard is a proud District of Columbia resident who lives in the Woodridge neighborhood of Ward 5 with her husband and two children.

On April 17th, Mayor Muriel Bowser announced my appointment as the very first executive director of Thrive by Five DC, an initiative coordinating resources and services for families of young children in the District, including early education opportunities. 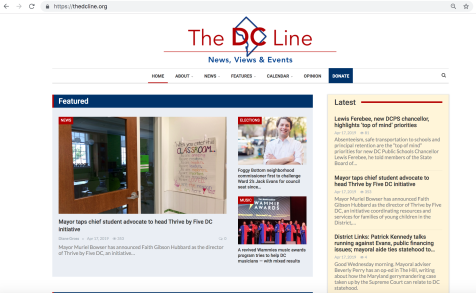 Over the course of my work I have been fortunate to have been asked to interview for various news publications, media outlets, community blogs, and work in coalition with other community/citywide organizations on education policy documents. Below I have listed a few:

“Continuity is really important,” said Faith Gibson Hubbard, the president of the Ward 5 Council on Education, a nonprofit group that advocates for quality public schools in the Northeast quadrant of Washington. “I can’t say that Chancellor Henderson is doing everything that everyone wants, but I do know that if we have a new person, things will be shaken up again. She’s making good-faith efforts and she’s passionate about what she is doing.”

Ms. Hubbard said she is “definitely worried” about what the wider fallout from the revelations about Gray will be.

D.C. officials delay opening of Brookland Middle School for one year to 2015

Faith Hubbard, president of the Ward Five Council on Education, said she is disappointed by the delay but agrees that — with enrollment lottery season fast approaching — the school system didn’t appear to have marketed the new school broadly enough to ensure a strong start.

“You can’t expect the Field of Dreams — build it and they will come,” Hubbard said.

Faith Hubbard, president of the Ward Five Council on Education, said she supports Dunbar’s push for more flexibility on budget matters, curriculum and staffing. But she, too, expressed concern about requiring students to apply in order to enroll.

“Wouldn’t it be even more a story of victory if you were able to do this with the students that you have?” she said.

Hubbard suggested that it might make sense to start an application-only program at Dunbar while reserving seats to accommodate neighborhood children. “If there were a particular program or two that was selective at the school, then that would be great,” she said, “because you could have a variety of kids learning together and encouraging each other to learn.”

“This has to be the worst time to do this process,” said Faith Hubbard, a Ward 5 activist who serves on the advisory group. She said she hopes the next mayor honors the work that goes into building a final plan.

Faith Hubbard, a member of the citizens advisory committee, said the boundary process already has triggered an intense citywide focus on school quality and is the first step in forcing the kinds of investment — both from D.C. Public Schools and from local communities — that families want to see in schools.

“This way, at least people are looking the lack of quality dead in the face,” said Hubbard, a Ward 5 parent. “There’s something at stake, something to respond to. Just waiting on DCPS to improve quality, it could be another 10 or 20 years.”

“The implementation is moving forward, but there’s still a question: Can they undo it?” said Faith Hubbard, a member of the citizen advisory committee that worked to develop the plan.

The office of the deputy mayor for education, which developed the plan, says it is “not a final draft” but something that will be updated based on “feedback, progress and new developments.”

Some changes already are in motion.

“Although upper Northwest in Ward 3 and those areas have been the loudest voices… their realities are just very different than other areas of the city. I don’t feel like there are enough diverse voices at the table so that everyone can understand the landscape of what’s going on in the city,” says Faith Hubbard, president of the Ward 5 Council on Education and a member of the committee.

“It’s really hard, because there are a lot of communities in the city that may feel jaded by certain processes that have taken place in the past regarding DCPS and education and so it may be hard to really reach those people because they may not feel the process is genuine,” she says. “Different communities have different norms. There may be a community where they don’t have the luxury to come to a meeting late at night, or they need childcare, or the weekend’s not really good for them.”

Some see the DCPS-charter relationship breaking down, but charter leaders disagree

“Everybody was disappointed,” said Faith Hubbard, a member of the committee who lives in Ward 5. “It was like, all this work we did over a year, and you want it to come down to this?”

Hubbard feels that attitude will be a problem for the task force that the recommendations call for. “Charters have been allowed to grow without much oversight,” she said, “and this task force is going to infringe on that. Anytime, they could say: we’re going to take our ball and go home.”

(A local community blog about the Brookland neighborhood in Northeast Washington, DC. Links listed below are of interviews that were conducted regarding education issues specific to our Ward 5 community.)

(Local publication that published a document that was drafted in coalition with various community and citywide organizations in response to DC City Council pending legislation and the adequacy study that was, at the time, being conducted by the Office of the Deputy Mayor for Education. This document was a precursor response to the student assignment and boundary process that was initiated later in the Fall of 2013 and completed in August of 2014)

Principles for the Second Round of Education Reform

Education 2013: Planning for a Great Future for Our Schools and Communities